Soletair Power’s technology captures atmospheric CO₂ utilizing buildings’ ventilation systems, turning buildings into carbon sinks, which results in an increase in employee productivity. Our modular solution operates with a plug-and-play approach, enabling any company to install and use Direct Air Capture. The captured carbon dioxide can be reused as a non-fossil-based resource in a wide array of applications for example aggregates, concrete, polymers, methanol, fuel, food, or even diamonds – or it can be stored or transported, thus effectively rewinding the pathway of CO2. Soletair Power’s business model is the world’s first economically profitable P2X fuel production model, where the fuel is produced from CO₂ captured directly from the air leading to increasing human cognitive functions as well. Soletair Power has been mentioned in The Guardian, BBC, The Wall Street Journal, Helsingin Sanomat, YLE, featured in CNBC’s Sustainable Energy Show, and named as the Carbon ghostbusters by Sifted for representing an important step towards a carbon-neutral future. Soletair Power is supported by Wärtsilä, Business Finland, Climate KIC and Ely-Keskus Finland.

Direct air capture of carbon dioxide is often associated with large filter machines piled one on top of another and moving large volumes of air. Large contactors are required due to the small concentration of carbon dioxide in the air and large daily production targets of these plants. As air is pushed in the filter, carbon dioxide and moisture are trapped or adsorbed. When the filter is saturated with these compounds the machine is closed and regenerated via vacuum and heating to collect the CO2 and water. Moisture is condensed leaving pure CO2 for compression.

The concept of Soletair Power

Soletair Power delivers solutions for capturing CO2 in air supplied to building ventilation. The same adsorption and regeneration principle is used in our system to capture carbon dioxide but the dimension is compact. The captured CO2 is integrated into an electrolyzer and synthesis unit where it gets converted to fuels or other hydrocarbons. 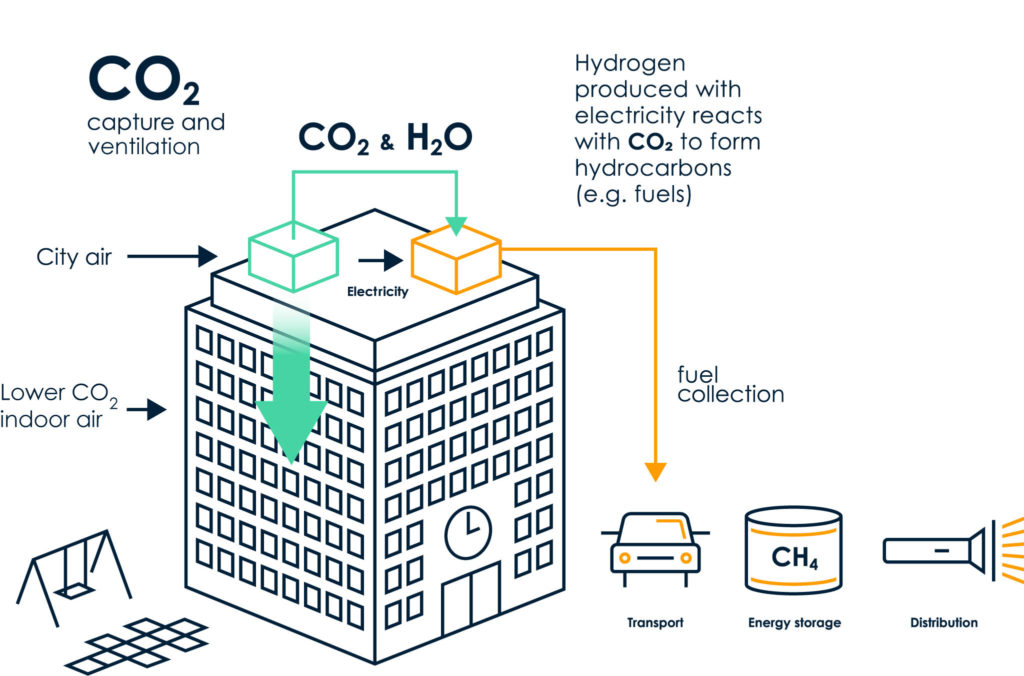 Our approach for integrating Direct Air Capture in Buildings

Many factors govern the design of ventilation systems, Soletair Power’s ventilation-integrated CO2 capture system is designed to work within these established design requirements. The system is aimed to meet the ventilation speed typically in m3 sec-1 and the customers preferred indoor CO2 level measured as parts per million or ppm.

For a standard ventilation unit handling 3.3 m3 sec-1, our CO2 capture system will have a dimension of 3 m (L), 2 m (W) and 2 m (H) and can produce 47 kilograms of carbon dioxide per day. Due to the space limitation in the HVAC room, the system’s piping, and dimension can also be modified to fit the customer’s specifications.

Below is an example of the visual outlook of our system installed in an HVAC room.  The system can be installed as a turn-key solution or can be assembled on site. The latter is especially suited to building retrofit installation where the access path to the HVAC system can be limited. The system has a modular design principle therefore it is easy to install multiple units if required.

The conversion of the CO2 to fuels or other hydrocarbons is done in a separate room in the building. Carbon dioxide from the CO2 capture system is piped to this room.

How does fresh air impact your brain?

For six full workdays, 24 employees (14 female and 10 male) carried out their normal job activities in a simulated office environment in a lab in Syracuse, New York. They were exposed to varying levels of carbon dioxide on different days, then tested on their ability to make decisions, complete goals, strategize in an emergency and so forth.

On average, cognitive scores were 61% higher on green days—those with fresher air—than on conventional days.

On the green+ days (when they circulated even more fresh outside air), scores were on average 101% higher.

The largest capability improvements were in the areas of:

Companies should ensure better air into their space. The challenge, of course, is justifying the expense.

This report from Harvard reveals what “higher cognitive performance” is actually worth. Using data from the Department of Labor, they determined that productivity savings have a value of $6,500 per person per year on average, whereas the cost needed to achieve that is only $2/person/day for the Soletair Power CO2-lean Better Air subscription service.

Clearly, the benefits of CO2-lean-air far outweigh other efficiency measures, like energy costs. Especially when you consider the impact of poor ventilation—lower productivity, greater absenteeism, and higher instances of respiratory health problems.

Soletair Power has already manufactured a containerized carbon capture plant for ZBT – Zentrum für Brennstoffzellen-Technik GmbH, a research institute in Duisburg, Germany. Another of their Power-to-X demonstration unit has been operating at the Finland Pavilion of Expo 2020 Dubai, which is making synthetic methane fuel out of thin air and powering a coffee machine. Other projects include installing an office CO2 capture unit at Vaasa, Finland.

This exciting new technology could lead to more affordable means for reducing emissions in buildings, and also for potentially removing carbon dioxide from the atmosphere.

View the carbon capture products on our PRODUCTS page ➜